The earliest issues in Trojan’s entertaining Crime Mysteries series contained cover blurbs promising “Chilling Tales of Crime and Terror!” and occasionally the series delivered big with the horror chops. Today’s pick is like kid’s stuff though compared to the last two tales we’ve had here but it possesses a groovy satanic gimmick and features the heroically named Lance Storm (a re-occurring character in the CM run) battling his evil arch nemesis Professor Zarno and his devil-garbed gang of goons. This isn’t rocket science folks, just good ‘ol crime bustin’ fun from page one, and the cover of this issue is one of my all time pulp-ish favorites! 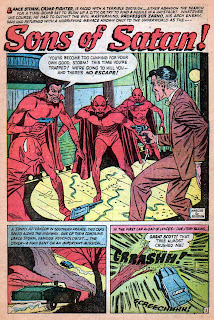 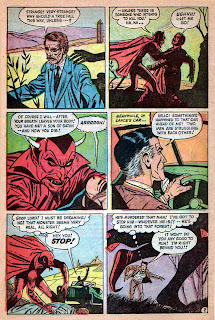 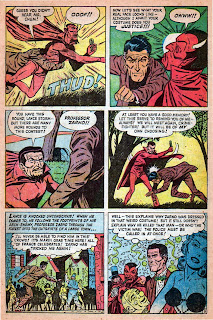 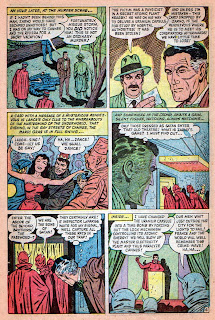 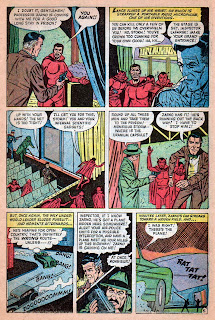 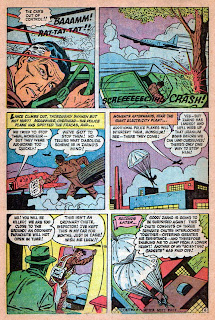 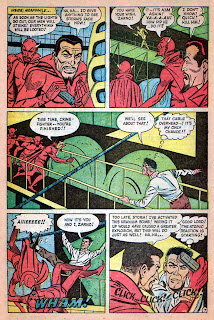 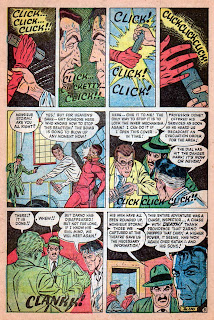 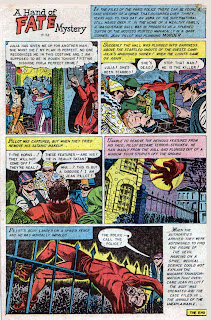 
With God (AD)Not to reign on anyone’s satanic parade today but here’s a wildly inappropriate, completely out of place religious ad that one could commonly find in pre-code comics… this one for example can be found in Dark Mysteries #13 on the inside cover page opposite the insanely evil, gore soaked opening splash for Horror of the Mixed Torsos! Let’s see, shall I open a whole new world of faith and spiritual understanding through Jesus Christ, or scare myself silly with brutal acts of depraved torture and dismemberment? 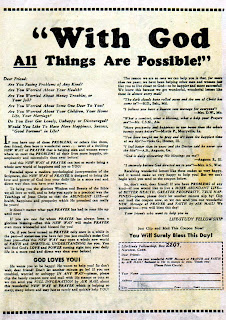 
Coming Next in July: We’ll be spending the entire month celebrating the first year of THOIA! (July 12th is the actual anniversary.) And to mark this momentous occasion we’ll be featuring not one, not two, not three, but 4 FULL ISSUES! Add to that a entire week of zombie tales, a sci-fi weekend, and more! This could be our scariest, hairiest month ever!

And starting tomorrow its the complete Dec/Jan '52-'53 issue of Eerie #10 featuring stories and artwork by Everett Raymond Kinstler, A. C. Hollingsworth, Harry Lazarus, and more! Here’s a preview… 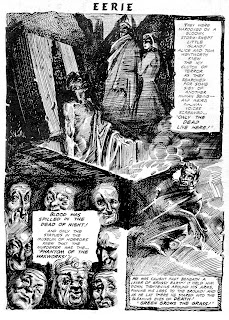 Hmmmm,a square-jawed hero vs. a mad professor interested in satanism....hmmm sounds a bit centric to this blog,in fact it reminds me of a movie i saw once,wonder what it could be?it might have involved a CURSE but it mighta been set at NIGHT too,but it definitely had a DEMON in it...hmm.as for the full issues,awesome idea.

Let’s see, shall I open a whole new world of faith and spiritual understanding through Jesus Christ, or scare myself silly with brutal acts of depraved torture and dismemberment?

Do we get to vote on that?

I GUESS IF YOUR GOING TO DRESS UP IN A COSTUME AND TRY TO TAKE OVER THE WORLD THEN A DEVIL COSTUME IS YOUR BEST BET. FUN STORY, AND COOL BONUSES TOO. I WAS LAUGHING OUT LOUD AT THE WITH GOD AD. MAYBE THAT WAS THE PUBLISHERS WAY OF SAYING THEY KNOW THE HORROR MATERIAL IS OBJECTIONABLE BUT LOOK HERES A RELIGIOUS AD THAT SHOWS WERE NOT ALL BAD.

Love the splash panel on "Sons of Satan"!

If the people behind the "With God" ad really wanted me to know Jesus, why not just tell me the secret in the ad instead of sending away for some religious tract. Who knows the damage I might do to my soul while waiting for the mail to arrive. If I go to hell it's their fault, not mine.

Gleefully awaiting the festivities to begin. Must get my human sacrafice ready for the anniversary!

>Do we get to vote on that?

Vote away, but I think I know you're answer and have already begun sharpening up your hatchet Todd.

>I GUESS YOU FOUND SOME WINNERS

I guess I did, but that will be of course for you to judge.

>why not just tell me the secret in the ad instead of sending away for some religious tract.

Because, not even they knoweth what they are talking abouteth.

Nice batch of comments here today, you never know how a day will play out when Satan is involved. Usually fun though...

Even without a supernatural angle, this is one wild tale today:

"Only those dressed as Satan enter!" Sounds like the Duke's last movie night.

Using an atomic bomb to knock out a power plant...kind of like killing roaches with a bazooka!

Storm's head is way too big for his body on pg. 5, and Zarno suffers the same hypo-cephalus on pg. 7. Plus back on pg. 5, the inspector totes a GIGANTIC walky talky.

Okay, you kept the BASE jumping parachute in your care for months, just in case...in case of WHAT? In case you had to bail out during rush hour traffic? Still, there's no arguing with success...

And of course the bomb-scientist ex machina. It never lets up!

Oh, and fyi Lance Storm, after retiring from detective work and feats of derring-do, went on to become a world-famous Canadian Wrestler.. S'troo.

Lance Storm was an all-new character for me, but the guy really won me over with this story. The one pager was a nice tie-in also.

I didn't read the religious bit though. That stuffs scary!

You know, I never realized how much Gustave Dore's etchings could be improved upon with the addition of SHOCK HORROR text blocks! Things they never teach you in art school...

Nice way to end the month Karswell, I am very much looking forward to next month.

I found the most entertaining part was when the party girl exclaimed "Laugh--sing! Come--let us be gay!"

The fellow behind her wasn't put off, though... as he insisted glibly, "Ha, ha... dance! We shall dance!"

"We are the Sons of Satan" was a pretty lame password...

A little off topic here but I took my son to see WALL-E last night and man it was teriffic! Very very well made, probably the best of the Pixar lot, nicely written, superbly animated, very exciting and full of true emotion you rarely find in an animated feature from America. Plus a great cartoon short before the movie called Presto which was easily just as entertaining. Two Devil Horns UP from Karswell's Monster Kid Korner!