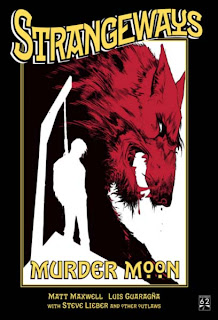 
How did you get tangled up in horror, as opposed to more traditional comics fare? Was it a childhood thing or something you came back to?


I blame my television. I blame Saturday afternoons when I could sit in front of the gigantic Zenith set that had knobs which popped and snapped audibly, the whining hum of the electronics as they warmed up and brought all this wonderful stuff to my hungry eyes. Sure, I read a lot as a kid, but never comics, not until I was older, and not any sci-fi or horror stuff, again, not until my brain got exhausted by reading encyclopedias and fact books. And when I’d absorbed The Real until I was stuffed, I became fascinated by all The Unreal stuff that flooded in on the cathode ray tube.


My childhood was ruled by giant monsters, moreso than Frankenstein and Wolfman and Dracula. Godzilla and King Kong and all those radioactive mutations (remember the guy in THEM plainly reading off that Los Angeles was now under a state of martial law?) rampaged through my subconscious in this sort of savage, slow-motion ballet. Except for Harryhausen’s monsters, which were infused with a peculiar grace, even if it was sometimes hidden in the shudder-steps that they took.


I’d say it was a childhood thing that I never grew out of, even if I lapse from time to time. Certainly through my adolescence, though, when grownups were up in arms about the hyperviolence of DAWN OF THE DEAD (which seems oddly quaint given today’s offerings). I dallied with written horror, but it never delivered the same way the motion picture did. After reading SALEM’S LOT, I never checked behind the door for lurking vampires, but Romero’s zombies made me leery of plate glass sliding doors (a fixture of California life) from the age of 12 or so.


I’d have to say the original KING KONG, which I watched at my father’s urging (as I recall), a couple years before the bizarre remake that Dino De Laurentiis put out in, what 1976? 1977? Like a sap, I wondered why the humans couldn’t leave that poor, dumb, sweet monkey alone. Maybe I figured around then that humans were the bad guys and the monsters were really where our sympathies lied. CREATURE OF THE BLACK LAGOON cemented that for me.


But not the original GODZILLA, who was a fearsome and unrelenting force of nature. I still try and carry that around with me, that understanding that the monsters are us and that we’re the monsters more often than not.


Printwise? One of the digests of the BORIS KARLOFF HOUSE OF HORROR or somesuch Gold Key comics. There was a story about magic sand from a beach that when sculpted would come alive and bad things happened (though it melted away in the rain), and a story about an astronaut who was not one, but THREE different monsters by the moonlight. Three monsters for the price of one? Sold.


Are horror comics scary or engaging in a way that’s different from movies or books? I always found that the reader’s ability to control time in comics made them a totally different experience, and often not as immersive or frightening as horror movies at their best.


Movies are scarier than books. Period. I’ve got a good imagination, but the levels of abstraction between inky squiggles and the werewolf on the screen always let me keep the written word at arm’s length. Not so with film. With film, I’m subjected to a vision (even if I can’t help myself from trying to dissect it—to varying degrees, depending on my level of involvement in the story). The action unrolls at twenty-four frames a second whether I’m looking or not.


Sure, I could pause the movie now, but only do so when forced to. But back then, if you got up and left, you wouldn’t see the Big Finish. In a way, broadcast television then was a very demanding medium. It was on their schedule not yours. The movie controlled the viewer, not vice versa. You can get that with big-screen movies now, but I don’t get to indulge that vice as often as I’d like.


Comics are great media for visualized imagination, but I’ve yet to be downright scared by any of them. Engaged, entranced, enthralled, yes. Not scared. Perhaps I’m broken.


I’ve often thought of superhero comics as literature of the imagination, where anything goes, no matter how big or crazy it gets. The more I look at pre-code horror, the more I get that feeling is at work there as well. No monster was too out there, too crazy not to be put to work. Is that part of the appeal of the pre-code stuff?


I still maintain that we’re missing out, now that comics have stepped up from “junk culture” status. The possibility of anything goes is far more constricted than it used to be, whether you’re in superhero comics or in horror or nearly any other subgenre. There was a time when the audience would accept anything put in front of it, but increased “sophistication” has certainly taken an edge off the imagination.


So yes, I cherish pre-code horror for the sheer “Can I really be reading this?” factor. Some of it is silly on its face, some of it inane, but even the worst of it DARES. Granted, some of that came from “What the hell can I do to beat the deadline this week?”, but you can’t make a fire without friction (unless you cheat and use gasoline.)


Is there any modern stuff that captures your imagination as well? Or do the different sensibilities call for completely different responses?


I’m almost afraid to say that critical acceptance of horror films (and comics to some degree) was one of the worst things to happen to it. Outlaw genres sometimes have difficulty adapting to life in a zoo. At its best, this stuff is wild and untamed. Taming it by copying the most easily accessed surface traits is like, I don’t know, domesticating it.


But not that old stuff. It’s very much stone axes, blood and gore and guts and veins in your teeth wheras we’re sitting around now with double lattes and talking in a very civilized manner about the rules that define this genre. I blame SCREAM, mostly.


Cronenberg is still outstanding. THE GOON is great, though it’s often not playing on my horror receptors. Same with HELLBOY. Oddly, Moore’s SWAMP THING, for the first half of it or so, plays quite well as straight horror, though that bled into metaphysics against a horror backdrop before too too long.


What’s more important to the kinds of stories you feature, good art or good writing?


Well, not that I feature anything, but I’m pretty partial to the writing side. If the story’s weak then all the art in the world won’t hide it (though it can prettify things).

Click the banner to learn more about Strangeways: Murder Moon, and thanks again to Matt for the duel interview!
Posted by Mr. Karswell at Sunday, June 29, 2008

I've gotta read this series.this guy is really on the mark even though i am a huge fan of written horror,i also agree about SCREAM,it's the FAMILY GUY of horror,pretentious,overrated,self-aware and just a repackaging of what had been repackaged before.

Murder Moon is not a series HP, it's a full length graphic novel, good stuff I highly recommend. Also, for those who haven't already, you can check out this interview again but with me answering the same questions here: www.highway-62.com/blog/

And look for more news about Matt's upcoming horror projects at www.highway-62.com as well.

I REMEMBER YOU POSTING ABOUT THIS BEFORE BUT THEN I FORGOT ABOUT IT. THANKS FOR THE REMINDER!

Thanks for the love, Karswell. Right back atcha.

And you can read the first chapter of MURDER MOON at: http://highway-62.com/strangeways

I actually have a contrary view to yours in that I find books and short stories to be far more powerful in the fear department than movies. Movies fill in too much of the dark scary places with someone else's idea of what is horrifying, whereas the written word requires me to plumb the depths of my own fears to paint a truly personally disturbing picture. I think that's why when I am watching a 'scary' movie I rarely feel scared until after the fact when my imagination takes things and runs with it. We are all different though so what makes sense for me may not be true for others.