Ever see the superb old Twilight Zone episode called "The Grave" starring Lee Marvin and Strother Martin? Those of you familiar with that wonderfully atmospheric horror western themed ep (no spoilers please) may immediately recognize the similarity in the twist of today's Transylvanian set post. Originally presented in the February 1944 issue of Suspense Comics #2, with early art from John Guinta --and for yet another filmed variation of Leo Rosten's short story, "The Path Through the Cemetery", and one that's a bit modernized and more in tune with THOIA's mid century mausoleum vibe, check out the ultra low budget, fraternity prank gone wrong fright flick from 1962 called Ring of Terror. 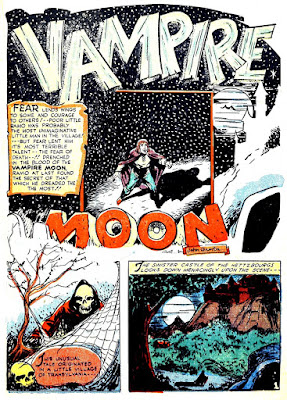 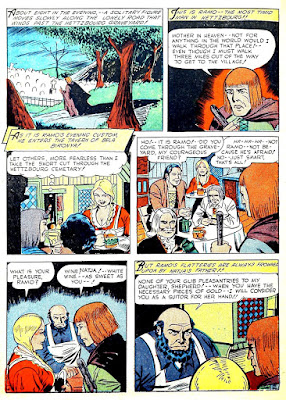 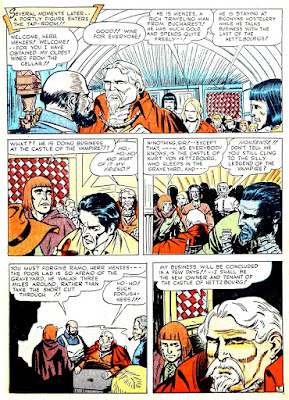 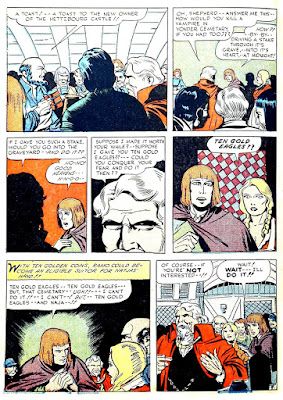 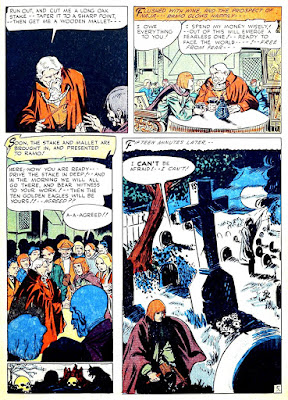 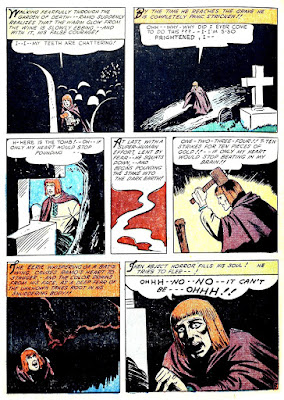 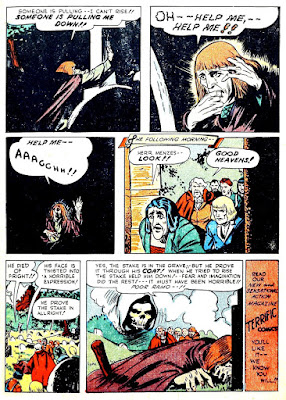 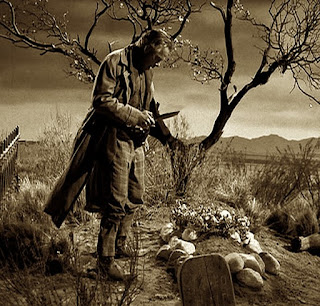 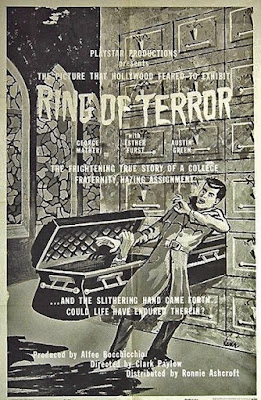 44! That's really early. This is an old urban legend that's told in a variety of ways, and the story is paced well in a very Sleepy Hollow type way (all setup/coward until the punch ending.). The art is really good for 44 -- there was certainly great art that far back but a lot of it was very static and this art has some good movement to it.

The growing blackness in the final two pages is a really effective trick.

Lee Van Cleef was also in that 'Zone' ep!
The scary skull host is before his time - as Brian states, amazing art for '44.

I too have heard this particular campfire story before as well. What readers don't know was that Ramo was spared the horrors that would befall the village every full moon, when the well fed Baron Menzes would strike.....

my phone is dying

HELP ME someone is pulling I cant rise! SOMEONE IS PULLING ME DOWN

A new twist on this old tale-

After Ramo drives the stake into the ground, he turns to find Menzes watching him and congratulating him. Surprised bet also relieved to see Menzes, he rises and Menzes escorts him away from the cemetery. About halfway through the cemetery, Menzes praises Ramo for his courage since he did in fact destroy the vampire that menaced the town below - and how does Menzes know all this? The same reason Menzes sleeps during the day in a coffin and casts no shadow or reflection. There isn't enough blood in one village for two vampires, mow is there?

A classic urban legend--somberly portrayed and well done here.
Page 5 has what looks like a demonic unicorn on the bottom left panel.

Btw, 'Ring Of Terror' is hilarious!

Even though I know that story from that twilight Zone and other places, I didn't see that ending coming at all. The whole story seemed to be setting up a happy ending instead. And yes, I wanted Ramo to end up with Naja.

Ha ha. Nobody's complaining about the color this time? It's like half forgotten in every panel. I like the snow in the splash, and would have liked to see more of that atmosphere. Every other panel is positively springlike. You can see the tufts of grass everywhere, but half the time they go uncolored.

I loved this artist's facility with plump people. You don't see a lot of incidental huskiness in comics, especially early comics. Natja is legitimately sexy, as well as built strong like an effective barmaid. I dig it.

Hey thanks for the comments all this month, and I really hope everyone enjoyed this side jaunt variety into the realms of other types of horror not usually featured here at THOIA. We'll do it some more in the coming months and possibly / probably just keep it a regular thang here in the mix of the usual type of precode horrors you've come to expect.

I have another one for you from the 40's coming right up too, so stay tombed...

What a wimp that Ramo. Never fear the dead because one day you will join them.

I definitely agree with Mr. Cavin about Natja. You can be what the world calls "shallow" when it comes to appearance (I am) and still like that look of hers.
In fact, she reminds me of a fully-clothed Scandinavian FBB (female bodybuilder), so that's MY reason for wondering what she looks like when she isn't fully-clothed.