The August 1953 issue of The Unseen #11 contains this charmingly clunky, unintentionally hilarious Artie Saaf werewolf tale, and with its indian mumbo-jumbo angle would probably feel more at home a decade or so later in one of the many Silver Age DC horror comics... that's the vibe I get from it anyway. 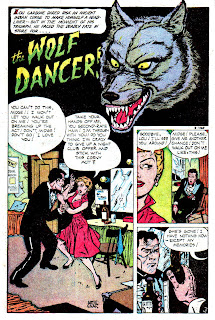 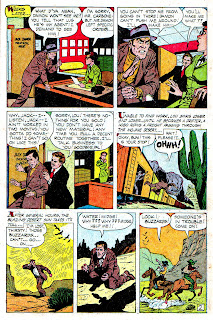 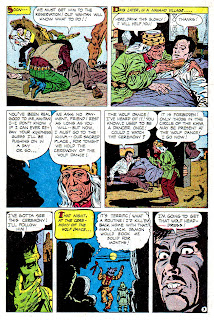 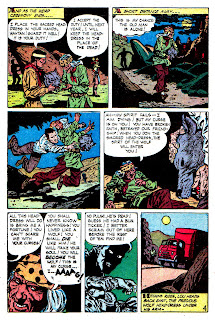 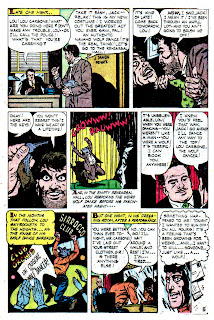 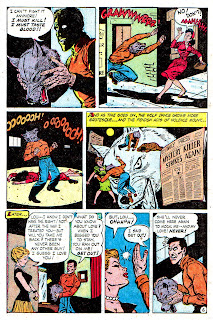 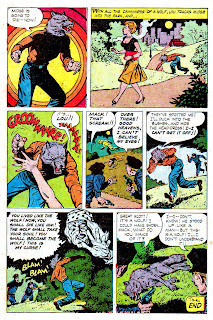 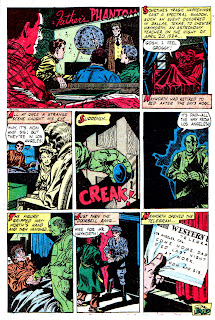 Love the clean artwork on this one. The colorist contributed alot to the goofiness of the story as well. Thanks for this one.

Yeah, this was had me giggling a bit. Love the early panel where buzzards automatically mean a person is in trouble!? Did Eerie Pubs ever swipe this one? Be perfect for 'em!

If this great tale does not convey the importance of character, or rather, what the lack of it does to guilty and innocent alike, then nothing can.
Nokhes to the writer and the Saaf as well.

This one strikes a fine line for me between so loopy I love it and so loopy it's a little too much. But, ah, heck, I think I love it. :) The panel with the nightclub introduction of the wolf dance is just...so...good. Bad good, but good. I'm *so* passing a link to the post around... thanks for sharin'!

Instead, try something like "now we are going to the place where we let hundreds of deadly spiders and slugs crawl on us -- would you like to come along?"

How long until 1940s cliche non-white cultures learn this?? At least on this one they didn't make a white woman their queen!

I always feel for the ubiquitous cops in these tales who always have to wrap things up real quick in that last panel. One cop always scratches his head and says something like "Jeez, Mac, what do you think about that?" whilst pondering some completely mind-shattering occurrence of the impossible. What a thankless piece of comic book history is theirs.

>The colorist contributed alot to the goofiness of the story as well.

I agree Bzak, and you gotta love that hypno swirl panel on page 7.

>Did Eerie Pubs ever swipe this one?

Good question, we'll just have to hope The Howler chimes in for verification on that!

>If this great tale does not convey the importance of character, or rather, what the lack of it does to guilty and innocent alike, then nothing can.

And thank you, Lisa! Very much appreciated!

>How long until 1940s cliche non-white cultures learn this??

Haha! So true. Another one: putting on a mask stolen from someone that you've killed will NEVER come off and/or will possess you / kill you. Every. Time.

>I always feel for the ubiquitous cops in these tales

Me too, Mykal... and seriously, someone should put together a "Poor Cop Ending" collection of pre-code tales with this sort of head scratchin' finale.

Got some requests coming up here shortly, but maybe we'll take another look at a few more Unseen tales... I'm digging through my long boxes now to find something extra worthy of following this goofy doozy! Stay tuned!

No- the Pubs never did this one. There's no way they could have topped that splash page anyway!

I agree with Karswell... this would fit in an UNEXPECTED from 1973 better than UNSEEN in 1953!

Pretty great stuff, all the same!

Haha! Thanks for chimming in Howler!

And will ya look at that-- 700 PRE-CODE FOLLOWERS! Amazing, thanks again to everyone that keeps joining our creepy lil club.

"I didn't know how ugly you'd become! I'm going out -- I can't stand the sight of you!" is my new favorite catch phrase.

Thanks for posting this work done by my dad, Art Saaf!

My pleasure Steve, thanks for stopping by! 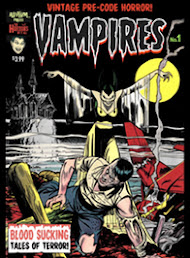